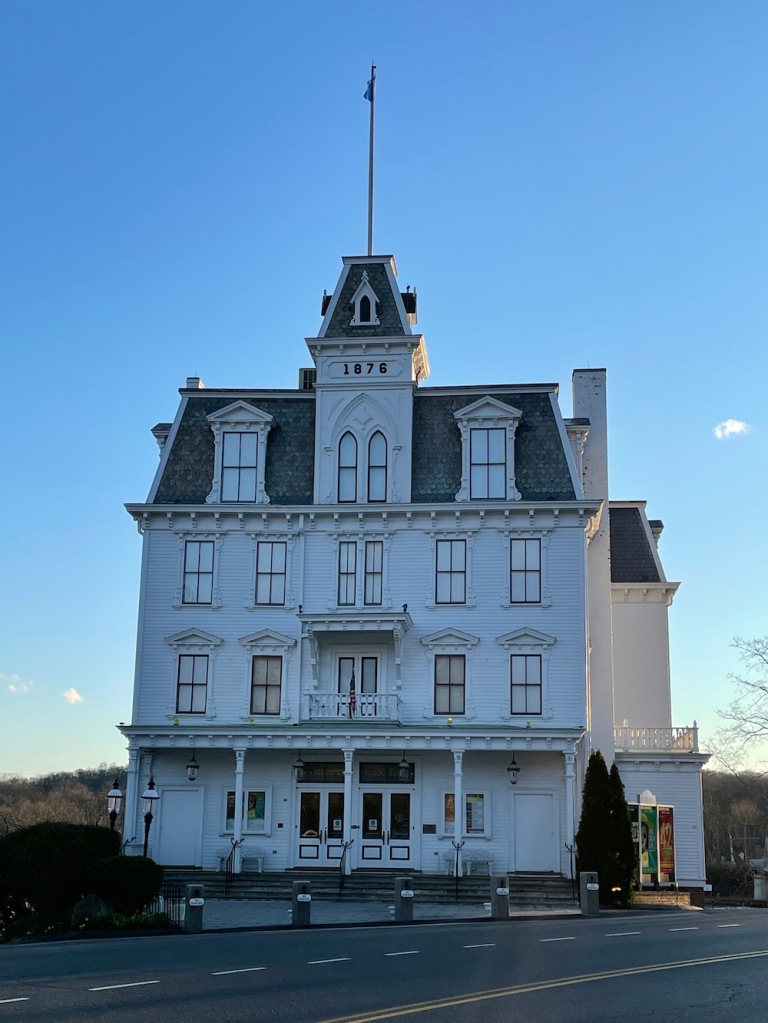 The Goodspeed in East Haddam, Conn. Photo by Lia Chang

I took a Metronorth train out of Grand Central to The Goodspeed in East Haddam, Conn. for my latest adventure to document the rehearsal room of Kander and Ebb’s dazzling and daring classic, Cabaret, directed by James Vásquez, with choreography by Lainie Sakakura.

The Kit Kat Klub will come alive for the first time on the Goodspeed stage from May 13 – July 3, with the official press opening set for May 25 at 7:30pm.

This unique production will feature Bob Fosse’s original choreography of “Mein Herr” as reconstructed by my frequent collaborator, choreographer Lainie Sakakura. Ms. Sakakura was given special permission from the Verdon Fosse Legacy to reconstruct the number for this production due to her depth of knowledge of Fosse techniques and specialized training in his work.

Willkommen, bienvenue, welcome… to Cabaret, Kander and Ebb’s legendary musical about British nightclub singer Sally Bowles, American writer Cliff Bradshaw, and the decadence of 1929 Berlin. With mounting fear and uncertainty outside, the bawdy Emcee lures you into the world of the Kit Kat Klub where your troubles are left at the door. Featuring the treasured songs “Maybe This Time,” “Don’t Tell Mama” and “Cabaret,” this Tony Award-winning masterpiece dazzles onto the Goodspeed stage for the very first time. 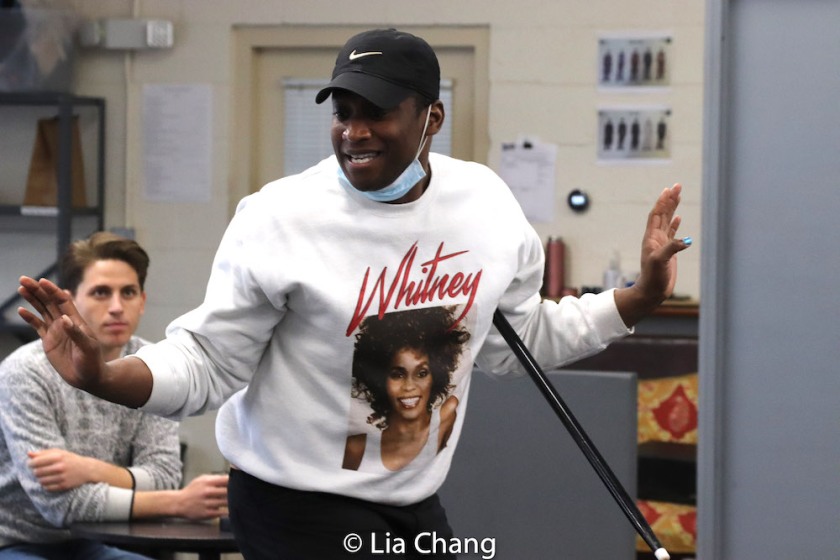 The Master of Ceremonies will be played by Jelani Remy who most recently was seen on Broadway playing the role of Eddie Kendricks in Ain’t Too Proud: The Life and Times of The Temptations!. He made his Broadway debut playing the role of Simba in Disney’s The Lion King as well as on the National Tour and Las Vegas productions. Prior shows include High School Musical (National Tour), Smokey Joe’s Cafe (Off Broadway) and The Apple Boys (Off Broadway).

Sally Bowles will be played by Aline Mayagoitia whose Off-Broadway credits include Notes From Now and Forbidden Broadway: The Next Generation. Across the country she has played a variety of roles including Eva Perón in Evita, Cinderella in Into The Woods, Lauren in Kinky Boots, and Nina in In The Heights.

Clifford Bradshaw will be played by Bruce Landry whose credits include Les Misérables and Anastasia the Musical on Broadway and the national tour of Rodgers & Hammerstein’s Cinderella as well as performances at Lincoln Center, New York City Center, and Radio City Musical Hall.

Jennifer Smith, who will play Fraulein Schneider, is a veteran of 15 Broadway shows including the original companies of La Cage Aux Folles, The Secret Garden, Victor/Victoria, The Producers, The Drowsy Chaperone, Gentleman’s Guide and Anastasia. Past Goodspeed appearances include Lucky in the Rain, George M! and How to Succeed…. 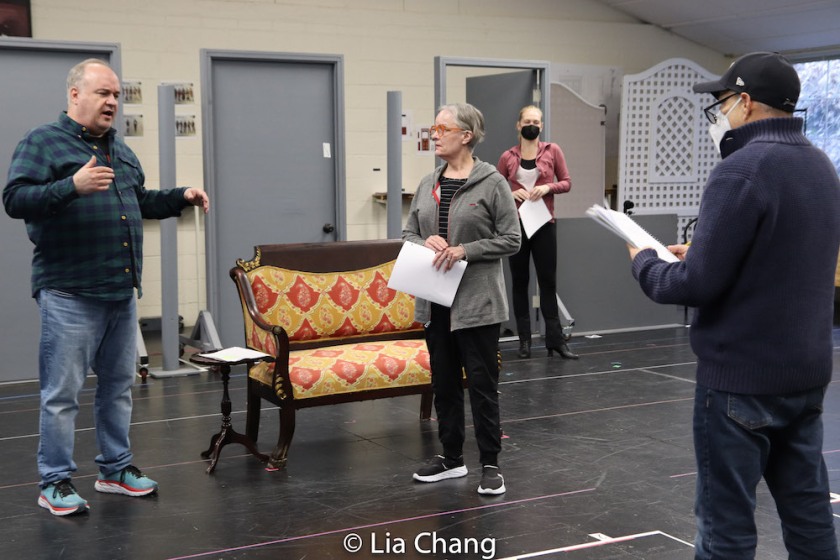 Kevin Ligon will play Herr Schultz. His Broadway credits include Hello, Dolly! starring Bette Midler, On The Twentieth Century, Bullets Over Broadway, The Phantom Of The Opera, Sister Act, Finian’s Rainbow, Young Frankenstein, The Producers, Kiss Me, Kate, 1776, and The Secret Garden and at Goodspeed: The Apple Tree and By Jeeves.

Fraulein Kost will be played by Terra C. MacLeod who appeared as Velma in Chicago on Broadway and the West End as well as national and international tours.

Ernst Ludwig will be played by Tim Fuchs whose credits include the national tours of Something Rotten and 42nd Street.

Swings for this production are Georgia Monroe, who is also the Assistant Choreographer, Nathan Fister, Emily Larger and Joseph Spieldenner.

Cabaret will be directed by James Vásquez, a Resident Artist of The Old Globe Theatre, where he recently reopened the theater with his production of HAIR. He directed the West Coast premieres of Tiny Beautiful Things, Hurricane Diane, the world premieres of American Mariachi, Dr. Seuss’s How the Grinch Stole Christmas!, Rich Girl, and Richard O’Brien’s The Rocky Horror Show. At Goodspeed, Mr. Vásquez directed the staged reading of Harmony, Kansas at the 2012 Festival of New Musicals. 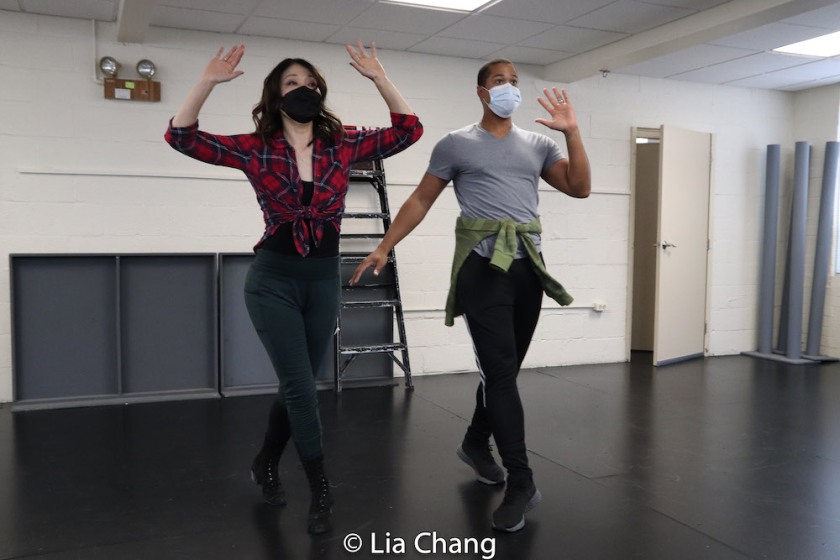 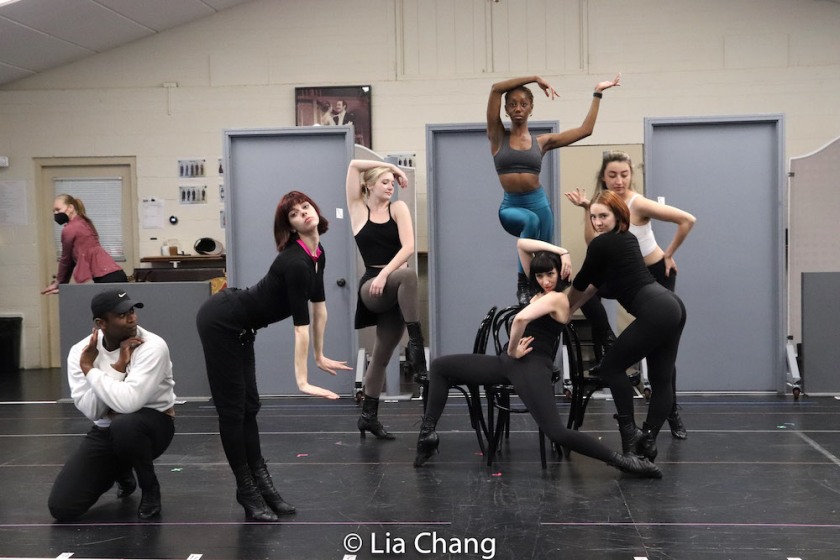 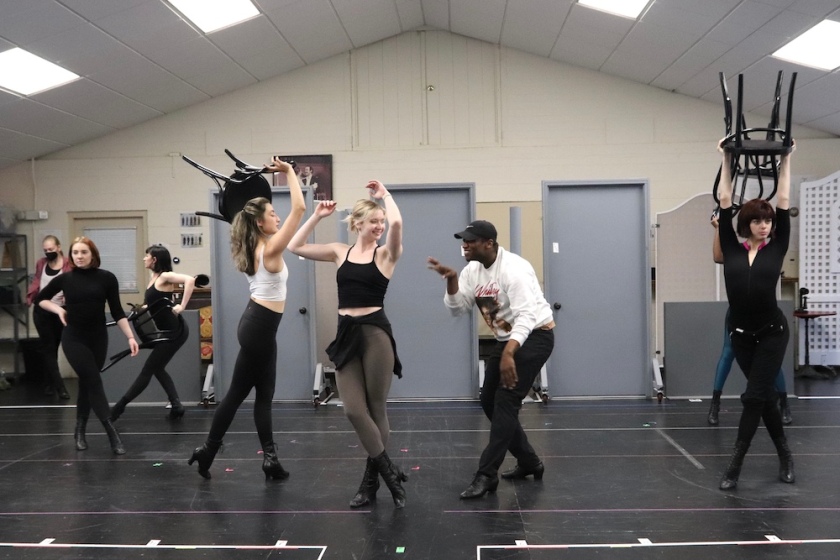 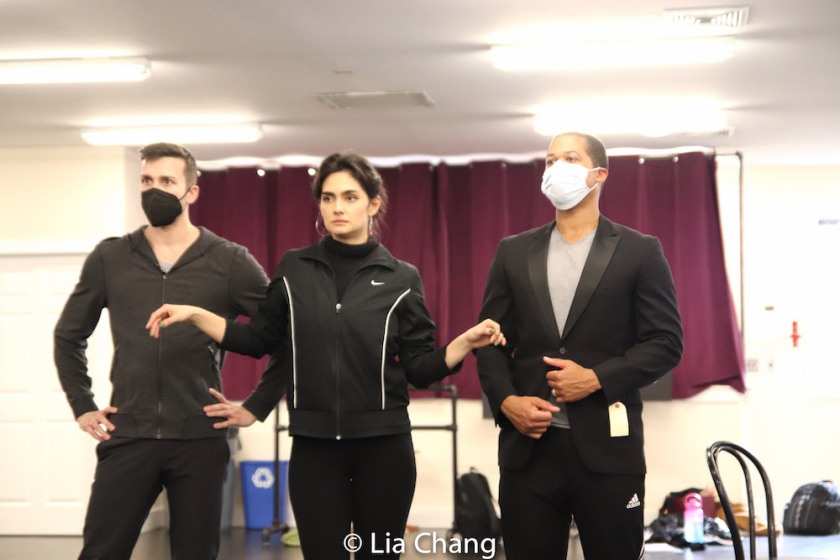 The Music Director for Cabaret will be Adam Souza. Now in his second year as Goodspeed’s Resident Music Director, he began his career at age 17 as the music assistant at Goodspeed. He has worked as Associate Conductor and later Music Director/Conductor for the First National Tour of Monty Python’s Spamalot. He then conducted Wicked on Broadway, was Music Director/Conductor for the original company of the Second National Tour of Wicked and later Associate Supervisor for the North American companies of Wicked, and Associate Music Supervisor for the mounting of the Spanish translation of Wicked in Mexico City and the Portuguese translation in São Paolo, Brazil. He has a long list of credits at Goodspeed, including A Grand Night for Singing last fall.

Scenic Design will be by Michael Schweikardt who has designed for many productions in New York, across the country and internationally. A frequent collaborator at Goodspeed, he has designed many hits including Show Boat, Carousel, The Most Happy Fella, Rags, Oliver! and many others. Costumes will be designed by Lex Liang who has designed 50+ productions in New York/Off Broadway, most recently Penelope: A New Musical, Antigone, Nine Circles, and The Bacchae. Lighting Design will be by Amanda Zieve who has worked on 19 Broadway productions and was the Associate designer for Escape to Margaritaville, Bright Star, and Allegiance.

Sound design will be by Jay Hilton who has designed countless productions at both The Terris Theatre and The Goodspeed. His work has been heard on Broadway, National Tours and Regional Theatres from coast to coast. He also serves as Goodspeed’s Audio Supervisor. Wig and Hair will be designed by Jayson P. Hayes who is a 2016 & 2017 Drama Desk Award Nominee for Outstanding Wig & Hair Design for his work on The Legend of Georgia McBride and The View Upstairs. His Broadway Theatrical design credits include Casa Valentina, The Realistic Jones’s, Spring Awakening, Blithe Spirit, 13 The Musical and The Radio City Christmas Spectacular for 10 years.

Fight Direction for this production will be provided by UnkleDave’s Fight-House whose Goodspeed credits include Billy Elliot, Oliver!, Oklahoma! and on Broadway: Girl From The North Country, Escape To Margaritaville, The Great Society, Tuck Everlasting, An American In Paris and Disgraced. The Dialect Coach will be Jennifer Scapetis-Tycer whose credits for Goodspeed include Billy Elliot, Passing Through and Hi, My Name is Ben. Ms. Scapetis-Tycer teaches on the MFA and BFA Acting programs at University of Connecticut and coaches for the Connecticut Repertory Theatre. Casting for this production is by Paul Hardt of Hardt Casting. Bradley G. Spachman, who has been on the Stage Management team at Goodspeed for over 25 years, will be the Production Stage Manager.

Cabaret is presented by arrangement with Concord Theatricals on behalf of Tams-Witmark LLC. www.concordtheatricals.com.

Tickets are available through the Box Office (860.873.8668), open weekdays at 10:00 a.m. and seven days a week beginning May 9th, or online at goodspeed.org. For show highlights, exclusive photos, special events and more, visit us at goodspeed.org and follow them on Facebook, Twitter @goodspeedmusicl, Instagram and YouTube

Goodspeed Musicals has achieved international acclaim and is the first theatre in the nation to receive two Tony Awards for outstanding achievement in musical theatre. Under the leadership of Donna Lynn Hilton, Artistic Director and David B. Byrd, Managing Director, Goodspeed Musicals is dedicated to the celebration, development and advancement of musical theatre. Goodspeed creates powerful, world-class productions of enlightening new and established works to entertain and inspire audiences. From Goodspeed, 21 musicals have gone to Broadway (including Man of La Mancha, Annie and Holiday Inn) and more than 90 new musicals have been launched. Goodspeed’s Festival of New Musicals and the Johnny Mercer Writers Grove are distinguished cornerstones of the organization that highlight its commitment to nurture the talents of new and artists and support the creative process. Goodspeed also maintains The Scherer Library of Musical Theatre and The Max Showalter Center for Education in Musical Theatre. Goodspeed gratefully acknowledges the support of the Richard P. Garmany Fund at the Hartford Foundation for Public Giving; United Airlines, the official airline of Goodspeed Musicals; the official audio sponsor Sennheiser; and official auto sponsor Hoffman Audi. The organization is supported in part by the National Endowment for the Arts, Connecticut Department of Economic and Community Development, Office of the Arts, the Shops at Mohegan Sun and WSHU Public Radio.

Lia Chang is a Chinese-American actor, a multi-media content producer, an award-winning filmmaker, and a photo activist and documentarian, who lifts up and amplifies BIPOC communities and artists and the institutions that support them.

Lia moved to New York from her home in San Francisco when she was 17 years of age and made her stage debut as Liat in a national tour of South Pacific with Barbara Eden and Robert Goulet. She spent many years working extensively Off-Broadway, including Signature Theatre’s revival of Sam Shepard’s Chicago. Her film work includes Wolf, New Jack City, A Kiss Before Dying, King of New York, Big Trouble in Little China, and The Last Dragon. The decades of being viewed by others through the narrow lens of “Asian actor” in the industry brought Lia to a turning point, and she picked up her camera, determined to create awareness by documenting the work and the lives of her BIPOC colleagues, resulting in the creation of thousands of photographs and pieces of video. Her photo archives are housed in the AAPI collection in the Library of Congress’ Asian Reading Room under “Lia Chang Theater Portfolio collection,1989-2011” and in the “Lia Chang Photography Collection” in The Billy Rose Theatre Division of the New York Public Library.

Lia’s awards include the 2000 OCA Chinese American Journalist Award and the 2001 AAJA National Award for New Media. She is also an AAJA Executive Leadership Graduate, a Western Knight Fellow at USC’s Annenberg College of Communications for Specialized Journalism on Entertainment Journalism in the Digital Age, a National Press Photographers Association Visual Edge/Visual Journalism Fellow at the Poynter Institute for New Media, and a Scripps Howard New Media Fellow at the Columbia Graduate School of Journalism.

Lia is honored to have worked with Prospect Theater Company on a shared mission of lifting up BIPOC theater artists and creating a more diverse and inclusive musical theater canon. A retrospective of Lia’s photographs will be on view at the Museum of the City of New York later this year, documenting her BIPOC colleagues and contemporaries in the performing arts, which will include photos of Prospect Theater Company artists at work. www.liachang.com, www.liachangphotography.com